Wisconsin's kids need you today more than ever.

Your support can help fund programs like Next Steps, fund research, help us provide critical care for the sickest kids and babies and develop community initiatives designed to keep kids healthy. Every dollar makes a difference.

As kids, both Hailey Danisewicz and Nate Hinze successfully battled bone cancer at Children’s Wisconsin. In the aftermath of cancer treatment, they had to learn how to channel their athletic passions while adapting to new physical limitations. Now, they will battle some of the top athletes in the world when they represent the United States in the Paralympic Games—Hailey will compete in the paratriathalon and Nate in wheelchair basketball. And while the paths they took to get to Rio may have differed, their journeys started from the same place. 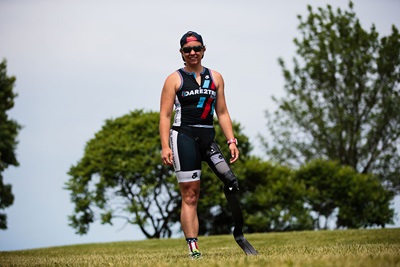 In April 2003, then-12-year-old Hailey was diagnosed with osteosarcoma in her left shinbone. She underwent chemotherapy and limb-sparing surgery at Children’s, but due to severe infections and various other side effects, she did not recover full function of her leg and ultimately opted to have it amputated just above the knee. 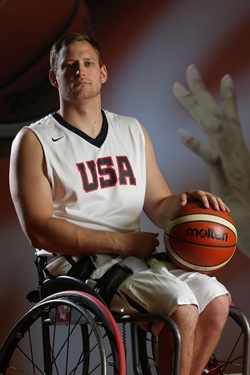 In March 2005, cancer was discovered in Nate’s right shinbone. At 17 years old, he too had chemotherapy and surgery at Children’s and experienced lingering side effects from the surgery. While still able to walk, he was left unable to run or jump.

"Treatment for pediatric bone cancer is intense and to some degree permanent physical limitations are expected," said Amy Newman, a pediatric nurse practitioner who worked with both Hailey and Nate.

To support patients and families affected by cancer and bone marrow transplants and help them live healthy, happy lives, Children’s developed the Next Steps Program. Survivors and their families meet with a team of specialists experienced in the issues faced by survivors of childhood cancer and bone marrow transplants, and learn about important resources like assistance finding jobs, scholarship opportunities for cancer survivors, and how to monitor and manage related health problems.

"When I finished treatment I thought everything was over and I was ready to move on with my life. I very soon realized that there is still a lot of stuff you have to deal with as a long-term cancer survivor, both physically and emotionally," Hailey said. At the time of her treatment, Children’s survivorship services were not yet fully developed, but Hailey credits her long-term care meetings (which evolved into today’s Next Steps Program) with Deb Schmidt, APNP, for helping her transition to life after cancer.

Children’s is the only health care provider in Wisconsin providing the kind of critical survivorship services offered through the Next Steps Program. These services are more important than ever as the survivor population grows, and are made possible through your support. While Nate participated in an abbreviated education session following his treatment, he regrets not taking full advantage of the program’s offerings. "The networking and support is invaluable," he said. "You don’t realize it until you already missed it."

Read the full version of their story here.

Your support can help fund programs like Next Steps, fund research, help us provide critical care for the sickest kids and babies and develop community initiatives designed to keep kids healthy. Every dollar makes a difference.

In 2015, thanks in large part to donor support, Children’s opened a state-of-the-art milk kitchen. And one little girl in particular played a pivotal role.

Around the 20th week of pregnancy, Caitlin and Evan learned that their baby's heart wasn't forming correctly. Baby Tommy was diagnosed with a heart defect where the arteries are connected to the heart abnormally.

Watch this video to learn how our school-based mental health program, made possible by the support of our donors, is helping kids like Takiya.