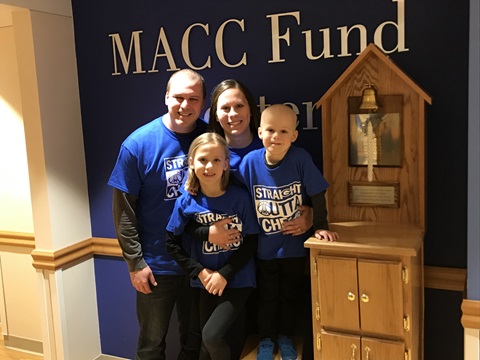 It was September of 2018, and usually energetic 5-year-old Dylan Pogodzinski was strangely lethargic. His parents, Dean and Jen, noticed his stomach area was swollen, too. With a trip to Disney World planned for the next week, the family decided to take Dylan to the pediatrician. After the doctor saw fluid around Dylan’s chest and lungs, he suspected it might be pneumonia, wrote them a prescription and told the Pogodzinskis to come back in a few days if Dylan wasn’t better. Two days later, they were back. This time, they decided to do some bloodwork. When the results came back, the doctor instructed the family to go directly to Children’s Wisconsin’s Emergency Department and Trauma Center (EDTC).

In the EDTC, Dylan had a CT scan of his torso, which revealed tumors throughout. Dylan had cancer. The little boy’s condition quickly deteriorated after that. He was admitted immediately to Children’s pediatric intensive care unit (PICU). The fluid had increased around his lungs, and he was having trouble breathing. He had decreased kidney function and other complications. Medical staff worked tirelessly to stabilize Dylan while oncologists worked to diagnose exactly what type of cancer Dylan had, which would determine his specific course of treatment.

Dean and Jen were in shock. One day, they had a perfectly healthy little boy, and the next they were in the hospital with a critically ill boy facing a cancer diagnosis. Dylan was diagnosed with Burkitt lymphoma, which is the fastest-growing human tumor. Tumors can double in size within 48 hours. This type of cancer is associated with impaired immunity and is rapidly fatal if left untreated.

As soon as the diagnosis was confirmed, Dylan was transferred to the inpatient unit within the MACC Fund Center for Cancer and Blood Disorders, where he immediately began the first of five rounds of chemotherapy.

“You don’t understand the level of care you need until you need it,” said Dean. “We knew a few other families who have had children with cancer, but we had no idea what they really went through. No one does.”

Dean said that the Children’s staff who cared for the entire Pogodzinski family was phenomenal. Meghen Browning, MD, the attending oncologist during Dylan’s first two weeks in the hospital, had the kind and calming demeanor they needed. Richard Tower, MD, was confident and capable when diagnosing Dylan and sharing what his treatment plan would look like. Bonnie Rydelski, RN, BSN, CPHON, and Kristin Siewert, RN BSN, frequently changed Dylan’s dressings and made him smile. The social worker, Sheila Dodds, MSW, even helped the family navigate how to get their money refunded from the Disney trip they were unable to take.

As aggressively as tumors grow with Burkitt lymphoma, thankfully, they can die just as quickly. Dylan’s body responded phenomenally to initial treatment, and the tumors were 70-80% gone within the first few weeks. He continued a course of treatment that involved one week of inpatient treatments followed by two to three weeks at home for five months. Fortunately, he experienced few complications.

Dylan had his last scan in February 2019, which confirmed the tumors were completely gone. He was declared cancer-free and celebrated by ringing the bell in the MACC Fund Center. His journey didn’t end there, however. He continues to see his oncologist every few months to check that he is still in remission. After three years, he will enter the Survivorship Program, where he will continue to be checked annually. Through it all, he has taken it in stride and shown amazing spirit and perseverance.

“Think about one doctor and one nurse and how much they care for their patients,” said Dean. “Then multiply it exponentially by the number of people who cared for Dylan across his entire journey through the emergency department, intensive care unit, MACC Fund Center and beyond. We are grateful so many people have a vested interest in healing and caring for our son and family. Children’s level of care is truly amazing.”