In a large white room on the eighth floor of Children’s Wisconsin sits a full-service kitchen for babies. But it’s not what you think.

Every day, this unique kitchen produces and prepares more than 300 bottles or syringes of milk for babies throughout Children’s Wisconsin. That’s more than 3,800 gallons of milk every year. And every drop is precisely formulated for the baby’s specific age, diagnosis and nutritional needs to ensure it has proper and complete nutrition.

While this state-of-the-art Milk Kitchen officially opened in 2015, its roots stretch much farther back. And one little girl in particular played a pivotal role. 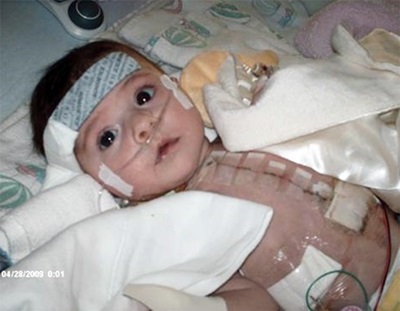 On January 28, 2009, Lindsey Pusick was born with a heart that didn’t completely develop.

Known as hypoplastic left heart syndrome, this serious heart defect requires three open-heart surgeries in a child’s first few years of life. Lindsey had the first surgery at our Herma Heart Institute shortly after birth and the second at 3 months old.

While normally the third and final surgery would take place between 1-3 years of age, Lindsey developed a buildup of fluid and fat around her lungs, a condition called chylothorax (also known as chylous pleural effusion). This causes a persistent cough, chest pain and difficulty breathing and made the operation too risky.

The primary way to treat chylothorax is to cut out all fat from the patient’s diet. For a newborn baby who is relying solely on breast milk for nutrition, that can be difficult. At the time, the only option available was a fat-free formula called Portagen Pregestimil.

“Lindsey did not tolerate it well,” said Jodie Pusick, Lindsey’s mother. “Her body continued producing the chyle even on this special formula and she hated eating it. She gagged at the smell of the formula and would throw it up.” 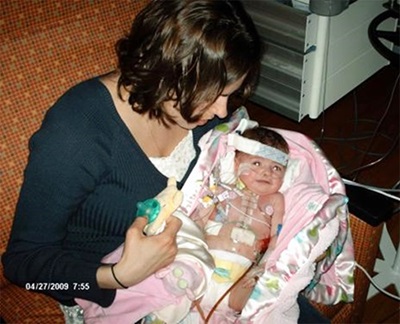 After a few weeks struggling with this formula, Jodie and her husband, Justin, started looking for other options.

“We asked about skim cow’s milk but were told that it was not FDA approved for babies,” said Jodie. “So, our research began.”

The couple ended up coming across the story of a boy in Connecticut with the same issue as Lindsey. Just like Lindsey, the boy had chylous pleural effusion following heart surgery and was not getting better.

“The family was desperate to save his life,” said Jodie. “It was the same story.”

But there was one main difference. That family had found a solution — skimming the mother’s breast milk.

“Their boy got better quickly after he began drinking his mother’s skim milk,” said Jodie. “We knew we wanted to try it.”

Jodie and Justin connected with that family as well as a doctor in Utah who was also skimming breast milk for his patients. Loaded with information and instructions, they were thrilled and thought they had found the solution. The process, however, was still rather experimental. There was no FDA-approved equipment available to skim human milk and, furthermore, its potential benefits and risks were largely unknown.

“At that time, our team was aware of this practice but it was not yet widely accepted,” said Barbara Hayes-Dineen, IBCLC, lactation consultant at Children’s Wisconsin. “There just wasn’t a lot of research to back it up. With any new practice, it must be developed by reviewing the research and developing a protocol to ensure patient safety.” 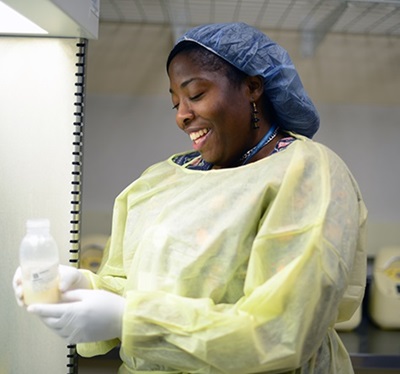 Ever resourceful, Justin, Jodie and Jodie’s father acquired a centrifuge, test tubes, syringes, bottles — everything they needed to skim breast milk. In a makeshift lab in their room at the Ronald McDonald House, the two got to work. They even connected with a dairy farmer friend of theirs who put them in touch with a laboratory that could test the milk and produce a nutritional breakdown report. For a couple hundred dollars, they got a full analysis that showed the milk contained no fat.*

One morning some days later, Justin and Jodie were in Lindsey’s hospital room when her cardiac surgeon came in. The two brought up the idea of skimming breast milk. He was open to the idea, but said that the family would have to find a centrifuge. Justin said they had one. Surprised, the surgeon then said that they’d need the nutritional breakdown to confirm there was no fat. Justin pulled the report out of his pocket from a dairy analyzer.

“He was speechless,” Jodie remembered. “He said we could do it!”

Justin brought the four small test tubes of milk they had skimmed to the hospital. The clinical dietitian team tested the milk, added a non-fat formula product to make it nutritionally beneficial, and then Lindsey started feeding with it.

After having spent most of her first seven months of life in the hospital, less than two weeks after starting feeding with her mother’s skimmed breast milk, Lindsey went home.

While Justin and Jodie were fighting for their daughter, they recognize, they were also fighting for every baby who would come after.

“The experience was stressful but we are just happy things worked out in the end,” said Justin. “We are thrilled about the Milk Kitchen. After everything was all said and done, we’re just happy knowing our experience led to other parents having the options that are available today.”

Six years after Lindsey left our hospital — happy and healthy — skimming breast milk became an integral part of our standard of care. In 2015, thanks in large part to donor support, Children’s Wisconsin opened a state-of-the-art milk kitchen, where not only do we skim breast milk, but enhance and fortify it using cutting-edge technology to ensure every baby receives optimal and tailor-made nutrition. What started with six milk technicians serving just one unit of the NICU has grown to 15 technicians serving 11 patient care units in the hospital.

“When we opened the new NICU and the Milk Kitchen, we were able to obtain approval for skimming human milk and develop a safe process,” said Barbara. “Nutritionists from Neonatal and Cardiac Intensive Care Units created recipes for fortification of the skim milk.” 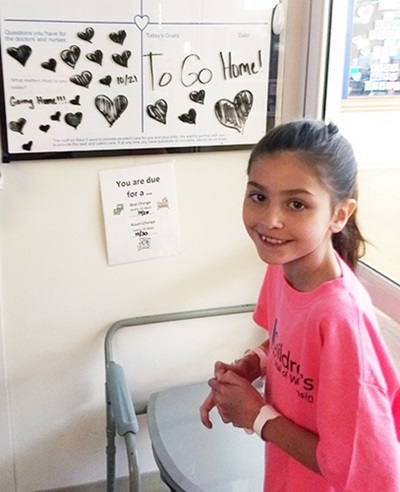 When the fat content is removed from breast milk, other nutrients get removed as well. The lactation consultants in the Milk Kitchen are able to add those vital carbohydrates, proteins, vitamins and minerals back into the milk to ensure it has all nutrition these fragile babies need to grow and develop.

That work benefited patients at Children’s Wisconsin, and kids across the country, as well. The clinical dietitian team — led by Beth Polzin, MBA, RD, CD, CNSC; Brittani Clark, MS, RD, CD; and Melissa Froh, MS, RD, CD, CNSC — have become national leaders in the skimming and fortification of breast milk. Their research was published in The Journal of the Academy of Nutrition and Dietetics and their standards of practice inform other hospitals how to provide the best nutrition and care to these babies.

Children’s Wisconsin has long been a champion of feeding with breast milk, whenever possible, whether that’s breast-feeding or pumping and feeding with a bottle. Breast milk provides babies the best nutrition, protection against infection and promotes growth and development. For mothers who want to breast feed, Children’s Wisconsin has a team of certified lactation consultants on hand to provide assistance and guidance.

Today, 11 years since she was fed with her mother’s skimmed breast milk and went home, Lindsey is doing great. In fact, she hadn’t been back to Children’s’ Wisconsin until this past October when she was at last ready for the third and final heart surgery. In those 10 years between hospital stays, Lindsey grew into a confident and outgoing young woman, whose life is full and only just beginning. And thanks to her and the determination of her parents, countless other kids will be able to do the same.

* Children’s Wisconsin recommends families only partake in medical care that is approved by their doctor and/or is compliant with all federal and state regulations.

10-year-old Elynn hopped onto her bike and zipped down the slight slope of her driveway. She lost control and the handlebars turned inward and slammed into her stomach, splitting her pancreas into two.

Everett’s story: a seemingly ordinary day — then a brain surgery

What started as a normal day at home for six month Everett, took a turn after he hit his head on the family’s granite kitchen countertop. When he arrived at Children’s EDTC doctors were concerned.

"There is HOPE in COMMUNITY." - Christie Nelson, Children's Wisconsin, Supply Chain Manager, who helped facilitate your many donations of PPE.